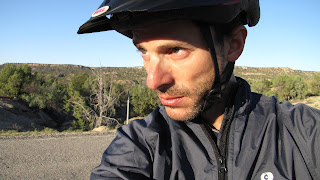 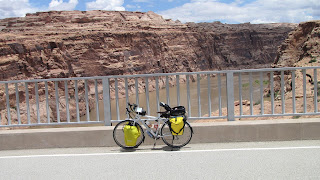 I had been dreading Day 38 for some time, and as i said in the previous entry, been obesessing over it somewhat. When i met Sean in Missouri somewhere (the buffed-out athlete riding San Fran to DC), in addition to the snake and bear warnings and sharing the digits of Tom and Gail in Fair Grove MO, he told me of his longest day (i asked: "what was your highest mileage day?" Competitive Danny). Sean and the map's narrative warn of the limited services in the 125-to-130-ish miles between Blanding and Hanksville, UT. Not just the lack of services (meaning food, gas, lodging, ranger station, you name it) but the lack of anything besides jaw-droppingly stupendous scenery suitable for extra-terrestrials to be lumbering around in. But i'll get to that.

When i say there are zero services between Blanding and Hanksville, i really mean there is zero-plus-one service: the Hite Campground. Every Western Express experienced cyclist who i chatted with coming the opposite direction spoke of Hite, mostly shaking off bad memories (one exception was a guy i met while freezing to death on the top of Monarch Pass who said it was fine; you just deal with it). The primitive Hite Campground is 50 miles from Blanding and 74 miles from Hanskville, apparently has very limited water (with different accounts of that water's potability), no bathrooms or other amenities, and has a store open very limited hours (different accounts describe the Hite store open until 2pm, others until 5 - but all say there isn't much to buy foodwise).

Sean's longest day was that ride going west to east, skipping the campsite and making it all the way to Blanding. He has been the only person i met that rode it in one day, and i intended to add myself to that list. (Before my head gets too big to fit out the library door, it must be said that the east-to-west version is easier as there is less climbing heading to Hanksville).

When the small town of Blanding ends, like many of the towns in Utah, there's no trailing off of people or houses or farms or businesses. Civilization is over for the moment, and nothing but wilderness awaits. I stopped a few miles outside of Blanding at the edge of Fry Canyon just to marvel at how quiet it was, at just after 7am, there in the middle of otherwordliness. I didn't even hear any creatures in the midst. It's really hard to describe what i saw and the experience of it, that beginning part in the brown and gray rock formations and plants that thrive with seemingly little water as the creeks on the map (in blue) were bone dry. I was a character in a sci-fi book on my tiny human-propelled craft seeking others like me, perhaps searching for peace. It was peaceful, and i absorbed it. Again, some tears at the vast chasm between "real" life and that incredulity at it being me experiencing that moment.

Moving on, passing Natural Bridges Monument into the Glen Canyon/Lake Powell area i came into the second wonderland-planet of the day, where red, orange and purplish-green replace the brown and gray. The buttes and mesas as well as certain rock formations, according to the map, have some puzzling names: Cheesebox, Cheese and Raisins (apparently some hungry people think the erosion of these massive rocks look like cheese), Jacob's Chair (Jacob who?). I rode through a giant birth canal, the rocks forming a bloody V on either side of the road. Rebirth! The weather was very cool still, and now and again the sun would duck behind heavenly cloud combinations. The sky was bluer than a friggin' postcard.

There was minimal traffic as it was only Thursday. The roads were fair to good, though the shoulders sported a bit too much gravel to ride on with abandon. But the drivers shared the road for the most part. The terrain was hilly - a longish climb for about 18 miles and then downhill for a while toward the Colorado River. I hadn't studied the maps so i didn't know that the Colorado was approaching. As i neared the river, the sky darkened somewhat and the air thickened with the possibility of storm. The bridge over the river was gorgeous and masterful, mixing the alien landscape with the cunning of man's capability to conquer it. I took a zillion pictures of the bridge - peering over the edge, then stepping back cuz i got that feeling like you wanna throw yourself in, a mix of vertigo and wanting to fly or die ( that used to happen to me on the 7th floor terrace of my grandparents' apartment).

It had been about 80 miles of the day at that point, slightly more, and it was nearing time to eat my soggy subway leftovers, "luncheon" as it's commonly known. As with all water sources you have to go uphill at least slightly after the downhill approach. The skies got angrier and it began to rain as i pulled myself past the bridge and back into the something/nothingness of the brutal landscape. Just a few drops, though. I unwrapped my sandwich and found a little rock-shelf of shelter that didn't look like it was going to erode (i.e. fall on my head). The rain increased as did my feelings of vulnerability. It can't get that bad, not on the longest day of the trip. But it did. As i rode up the steepest hill of the day the wind was blowing so hard that a couple of times my front wheel (with 10-15 pounds of weight!) lifted slightly and i had much trouble staying on the road. Bone-crunching thunder. I thought of Donny, my mother as i do in situations like this - fearing the worst. "At least he died doing what he loved." On some level, getting struck by lightning's kind of a hot way to go, right? Right? Can't help what crosses one's mind. After about a 1/4 mile, the incline increased as did the sheets of rain soaking me. Please don't hail, i couldn't help thinking, worrying now that i'd jinx myself like i did going up Monarch. It didn't but i was completely soaked. Cars passed me. I began to think about whether i'd take a ride if someone offered. I kind of hoped someone would stop and ask if i was ok - but i also hoped they wouldn't so i could just push on. It rained like that for only 3 miles. However, with the wind directly in my face and the daunting hill, that 3 miles was about 45 minutes. I had already passed the stupid Hite Campground 20 miles ago, and even if i wanted to stop, how would my measly tent provide shelter in this? No choice but to go on and think about the experience as a future war story. In those situations, in the middle of nowhere-to-run-nowhere-to-hide-land, you just hope and pray it's not going to last too long.

And it doesn't. The rain stopped and several hours later i rolled into Hanksville, a dot of a town that made Blanding look like New York. I ate that town. I ate the whole thing.
Email Post
Location: Hanksville, UT 84734, USA 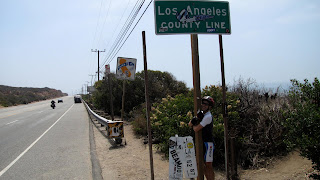