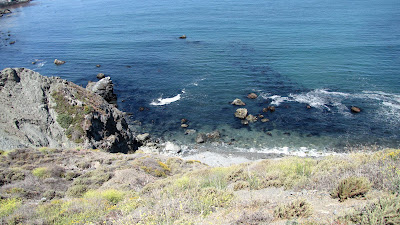 Day 55 was the final day of traveling alone. It's fitting, I suppose, that this day's goal of 110-ish miles downdowndown (meaning southsouthsouth, not downhilldownhilldownhill) the Central California coast to San Luis Obipso was definitely in the realm of daunting. I woke up before my watch did, shuddering at the sting of the July morning air. Despite many on-again/off-again cold mountain mornings over the last few weeks, i continued to be affronted by unfamiliar 5th-of-July weather, still grasping at the idea that summer = warm. I visited the shitter/shower, sadly not as sparkling clean as one might want yet not as bad as could be the morning after Independence Day. I nibbled my overly-hard hard-boiled eggs and gnawed through the tough bagel as i rolled up my tent for the last time of the trip, as the plan was to unload the camping gear at the post office in San Luis the next day, happily to make room for Donny's stuff. Everyone else was still sleeping around me.

Pam the campsite manager had said that San Luis was 103 miles from Big Sur. My maps told a slightly longer story - 110 miles. But since i didn't have a plan for the night (figuring San Luis Obispo would have an array of choices at the bitter end of a holiday weekend), the number of miles was an estimate anyway. Couldn't plan the night either as there was no cell service. At least, it wasn't hot and likely wouldn't be since the ride would be coastal until near the end of the day.

The first 35 or so miles of the day was familiar. When Ju, Kersh and the girls and I came to Big Sur back in April, i did a training ride of about 70 miles (35 out from the campsite and 35 back, if that's not clear). That had been a difficult ride, particularly on the way back (into the wind), treacherous and hilly (though magnificent), a ride that had given me some early doubts about my ability to bike 70 miles at all, let alone riding more than that on average nearly every day for two months. It had been during that trip to Big Sur when Ju and Kersh had gently asked me if this journey was something that i was actually wanting to do, since i only spoke of how unprepared and unsure i was about it (I have referenced this conversation elsewhere in these posts). How long ago that 3 months seemed, as i strong-armed Whitey Jackson onto Highway 1 from Riverside Campground and Cabins and began the day's first climb.

Yes, it remained familiarly exhausting those first miles; i was reminded of the April trip as i slowly climbed through the town (if you can say that) of Big Sur, passing Nepenthe where the Kershaw clan and i had eaten after my ride in the spring. (I smirked as i said aloud Ne-pen-the in the tri-syllabic way that Ju and I are wont to do. How do you pronounce that anyway?) I was not quite awake for the first few hours. I think the earplugs had not been a good idea after all. Plugged the sleepiness in my head somehow, made me sluggish. In short, I'm a crab today, feeling the monotony of it all despite the wave-crashingly dramatic scenery. Though the coastal vistas in this area are unparalleled in my experience, i took them in more by osmosis than in the smell-the-flowers kind of way. The view surrounds you on this road; there's nowhere you can't ingest utter majesty - but i didn't stop much at all based on the crabapple factor. 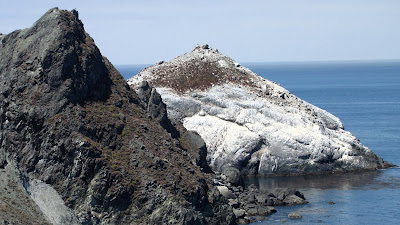 The air was thick with shivery brine; the sun behind the generous cloak of clouds periodically shifted the light from gray to pearl to silver. It was early enough that even though it was the Sunday of a holiday weekend, there weren't many cars, and no one sweated me as i trudged past the minute hamlets of Lucia, Pacific Valley, and Gorda which didn't seem that gorda to me. Luckily the bike doesn't require gas as the price at the Gorda station was almost $4/gallon. The most significant climb of Day 55 confronted me a few miles past Gorda (on the map it looks like it's called Silver Peak), winding to an acrophobia-inducing pinhead before spiralling down to sea level at Ragged Point (i'm "spiralling" in the Queen's as a nod to Keane's 80s throwback tune which i could barely hear through the wind).

Ragged as the point might be, the clouds are lifting and so is my attitude as I hit the day's 50-mile (and nearly-halfway) mark sailing into San Luis Obispo County, which means there are ONLY THREE COUNTIES separating me and Los Angeles County. After Silver Peak, the terrain really flattens. The afternoon has begun and so has the tailwind which is keeping me moving at a satisfying 17 miles per hour. Signs for sea lions and Hearst Castle abound. I pass a few shuttered beachside motels and fantasize about Donny and I taking one over, shaking the sand off the sheets, applying a coat of paint to the shutters, and skipping peacefully at the water's edge for eternity. A minor traffic increase dents the reverie as i approach the Castle. i can barely see it way up in the distance. Who cares? I've gone almost 70 miles and I'm starving. Surprisingly, there isn't anything to eat on Highway 1 near San Simeon. Or if there is, i don't see it. By my calculations (or, rather, the map's), Cambria is only 11.5 miles from San Simeon Non-Village, and i know there's food there.

I've never been a fan of Cam-bria or Came-bria, however you pronounce it. It may be where sea lions go to breed but it's where humans go to break up. I know 3 couples, just off the top of my head, who have ventured to Cambria for a romantic getaway and returned as singletons. I don't know what it is about Cambria. The Cambria Chamber of Commerce makes the place sound like ambrosia-infested Olympus, but it's a trap, a lure for troubled twosomes. It's like couples therapy - you just need help breaking up so you go to counseling together. Never mind all that - just go to Cambria! Until the trip in April with the Kershaws, i had steered clear of Cambria, had driven past it, turned off by the main drag, on the east side of the freeway. The buildings are facades, like a street on the Fox lot. But in April with the Kershaws it had been time for lunch. Repelled by the cutesy-fake movie set on the left, we pulled to the beach side, settling on a restaurant in a very modest beach hotel. It was a gob-smackingly windy day and we sat indoors by the window watching people and plexiglass wind guards bending, almost whip-snapping in two. As i feared about Cambria, the best thing on the menu was the oleaginous grilled cheese Martha ordered and didn't eat.

But this was July, i was on a bike, and it was, again, time for lunch. Big Sur was 80-ish miles ago and the apple and Clif Bar I'd eaten since then had evaporated to salt on my skin. I rode up and down Main Street indecisively before settling on a diner-type place where i could eat on the patio keeping an eye on Whitey. I was a little worried about getting ripped off by an unhappy couple sensing that tomorrow i was to be reunited with my One True Love. I Tasmanian-Deviled through turkeysandwichfriesandasidesaladyesboththefriesandasaladthankswithranch and briefly flirted with dessert which i declined as the clock was ticking, i had no phone service, and hadn't secured a place to stay.

A few miles from Main St. my iphone sprang to life. I decided to check on the B&B that Carrie and Jeremy, San Luis natives, had recommended as the best place for me and Donny to reunite. THE SANITARIUM, it's called. (Cue sinister laughter). Because it was a sanitarium a long time ago. I spoke to Suzy who offered me a room in the rear house and gave me a lower price than Carrie had quoted for a reason i can't quite remember. Something having to do with a shared sitting room space with another guest room. Who cares? i was set for two nights and ready for comfort.

But not for 30 more miles. The rest of Day 55 took me through the coastal communities of Cayucos and Morro Bay where i continued my fantasy of the beach bum lifestyle for me and Donny, wishing away the fact that the water up here is damn cold. At this point, i figured out why the signs to San Luis (which agreed with Pam from the Big Sur campground) kept telling me i had less mileage than my map said: it was because i had to keep getting off Highway 1 proper onto service and side roads which added to the miles. Which i'm ultimately grateful for - the less time spending on the actual highway, the better. I got lost trying to stay on the bike path through Morro Bay State Park and the GPS on my iPhone helped me find the proper road to ride inland toward San Luis. It was actually warm by this point, maybe 5pm, I rolled down my arm warmers for the first time that day and welcomed a bit of sweat appropriate for nearly a hundred miles.

I took Foothill Blvd. into San Luis Obispo proper leaving behind the cows, orchards and the dry golden hillsides for cafes, college students, and California mission-style architecture, rights down to the street signs. Upon first glance, San Luis smacked of a small-town shake-up mix of other familiar joints. Luis is the skateboarding-crazed bro of the 3 beachside Santa sisters: Monica, Barbara and Cruz. What a nice family. I clocked 113 miles as i pushed Whitey to the doorstep of THE SANITARIUM. (Insert sinister laughter otra vez). Ok, there are no ghosts of vacant-eyed rocking-chair Victorianas floating around. The place is a converted private hospital that once cared for people with pneumonia and other early-20th century big killers. 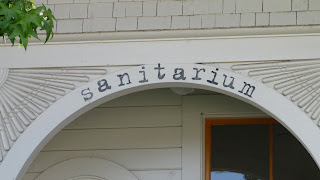 Suzy welcomed me with a no-nonsense implacability that i mistook for warmth because she is the not-quite-doppelganger of Kim Gillingham, the most welcoming person on the planet. She showed me around the main house which is painted consumption-recovery white. The color is oddly soothing and highlights the kaleidoscopic (and some very good/some not) artwork that's displayed throughout. The rooms in the main house all have names containing many Greek and Latin roots, such as Hydrolucinogen, Euphoriasma and Ephipenization. I don't believe - but i can't be sure - that this is meant to be satiric, so i'll just leave it at that. I was shown my digs, a room called Towanda in the "Outpatient Ward" (Donny will love the Gothic-ness of all this), the only one without a gigantic Moroccan soaking tub. There was, however, a grand painting of large-lipped creepy children wading in a pool hovering above the headboard. Suzy committed to cleaning the other outpatient room which had just been vacated so i could use the tub in there. Which i sunk into as soon as you could say "herbithermogenerosteoporific." The bath care selection wasn't what you'd think it'd be, but since i had nothing, anything was hydrocorporeclecticorgasmicalaceous!

After drying myself with towels spun from the golden fleece, I strolled the TWO BLOCKS to the train station where i would picking Donny up the next day. Yes, TWO BLOCKS. This could not have been better planned. I dined at a fancy-schmancy place sitting where i could see the train tracks. Seventeen more hours until Donny.

Gastrosoporifically, I floated back to my cloud and nestled alone for the last time. 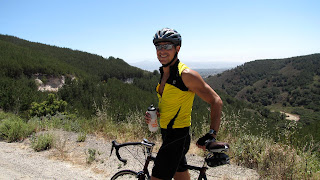 Day 58 - The Bony Claw of the Mancini Curse